Bumped into an Ah Ma at cc20 while surfing the channels. Was pretty lucky to bumped into one after a year of absence x)
So, yeah, the first person I called was iwlsp, coz he wanted Ah Ma. Then, later The Beggar aka Icemaker came also. Didn't even chio him come, then anyhow come F3
Among the members in the party were Tokwanyi, iwlsp, Icemaker, davidlimxxx(leecher), Cherylsp and lastly me. A 6 men show. 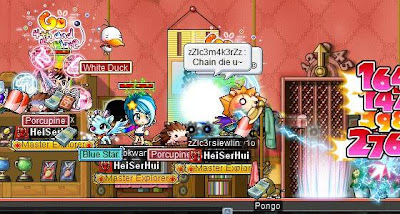 It was really hard to pin the Ah Ma because poor Tokwanyi was lagging. And once, the Ah Ma chased me all the way to the end corner of the left side of the map...Zzzz...
But,
Sleipmon, you better be reading this...
I didn't die. F3
~ ~ ~
Yeah, so after Ah Ma, uncle iwlsp chio the kids, which is davidlimxxx, me and Icemaker go SAM :D
Since, it was me and Eric's first time going to SAM, we got a little lost, even with davidlimxxx help. Even now, I'm still not sure how to get into the Boss Map F3.
Auntie Cherylsp and Uncle iwlsp told us what to do. But, just like kids, we started misbehaving F3.
But, everything went smoothly after pro Uncle iwlsp pinned the Samurai to the left side of the map.

It was a great first time experience. I almost dozzed off.
And, yeah. That was all for today's report.
And,
Why am I the only one updating?!