The vibrations from my phone sounded. I put down my pencil and "Unlock" my phone.
It was a message from my "Didi". It was 12.42pm.

The word "hacked" appeared in my head.

I told myself it wouldn't happen. Me? Hack? Nahhhh...

Have you ever seen one of your friends/guildmates got hacked before?
How did you feel?

Once, I thought that I wouldn't be the next person to get hacked by hackers in the game. Since it never happen to me before since the day I started mapling. 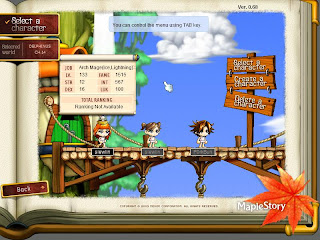 So, yeah. I log in and found out I was totally naked.
Oww, poor P0rkBun :(

But I still manage to pull myself together.

So, my Godly equipments. Some of it not even scrolled yet but yet very hard to find those kind of Godly stats.
The most Godly of all equipments was my purple cape ma7,int+11. My first Godly scrolled equipment ):

It's so heart breaking ): Really.
Now I know how people feel when they got hacked.
I thought of locking my cape, but I thought I wouldn't get hacked. So I've regretted for not locking it. Dam =O


My pots were gone. Lucky it wasn't much either.
Almost everything bah.

Only left was my zakum helmet, quest items and my overall robe and colourful tube -.-
Well, at least I have things to wear :D other then walking around nakedly =O 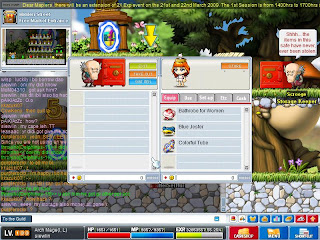 Even my storage money wasn't spared, of coz. 44m gone.
Once, I thought saving money in the storage keeper is better coz I thought the hacker might be that stupid to not to check the storage bank :D
But, I was wrong larh of coz =O


So, yeah. I was suppose to help a friend to do the 4th job quest. Getting Ifrit.
So, I told her I couldn't help her coz I got no pots and suitable clothes to survive those attacks from the monsters. But, she was nice enough to spare me free pots and clothes to help her. 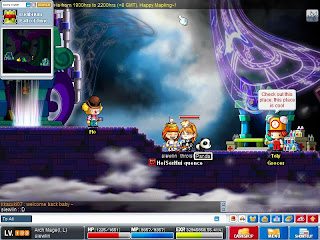 After that, I try my luck and went equipment hunting in FM to hunt back my equipments. But, luck wasn't with me that day. Some of the purple capes has similar stats as mine. So, I wasn't sure enough.

And I saw this Pyogo. Almost same as my stats. But, I wasn't sure also. 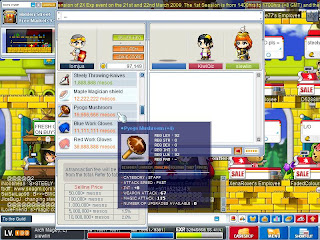 So, at the end of the day. I did nothing.

I couldn't even change my password due to some maintenance their having.
Till further notice they said. ZzZ...their worthless I tell you (:
I heard that Asiasoft has a hacker or something in it.
Some people were also hacked.

So, there's a high chance that the hacker might pay a visit to my account, again (:
But, of coz. There won't be anything to hack anymore ;p
Unless you wanna use my character and ruin my reputation, go ahead.


So, conclusion. This will consider another of my Maple experience and I will never forget it.

Yes. I say I was semi-quitting. But I will logged in once in awhile to check on things.
And mostly and mainly is used by my Didi.

Thanks everyone who have comforted me. And thanks icecreamr1 for erh...lending me your equipments. Cheryl too.
Nah, don't worry. I'm not that sad. Just speechless. xD
Although, I went a little bonkers thought ;d

Does anyone knows your account?
Yes, only my DiDi knows it and I thrust him.


What makes you think it isn't your Didi who hacked you?
Cause, I really thrust him. If he would want to hack me, he would have hacked me earlier when I gave my account to him 3 months ago.


When was the last time you were playing before you got hacked?
Last night. Log out at 2.30am.


How do you feel?
Nothing. Just a big lost. Not sad, okay a little. But overall,
I still can't believe I got hacked xD Tee hee...
But, I think it won't affect me.
C'mon la...I'm not a cry baby who would break down and cry in front of the computer just because of being hacked...it's just a game!


What is your next action?
Waiting for the bloody dam MapleSea maintenance thingy to finish so I can reset my password.
After that, go study.


What is your advice to other maplers out there?
Change your password ASAP. Put your Godly equipments into your storage. And, pray hard you won't get hack.(for those who are maplers addict, that is ;p)

What is your advice to other maplers who got hacked?
Cheer up. It's not the end of the world. Slowly rebuild.

A Message To Those Hackers Out There :

Why are you wasting your time doing this kind of stuff?

You think it is so fun hacking other people things?

you're just wasting your bloody time hacking other people's account.
Get a life!

You're greedy. You craved more mesos because you're too lazy to earn them yourself.
You're selfish. Selfish indeed you are.

A Message To The Hacker Who Hacked Me :