It's been a "busy" week. For the first time in many months, after our guild rank has drop to 5th place, we've been organizing guild runs almost everyday. Day and night. If that doesn't drive you insane, well, for me it does. Plus, my poor laptop could not stand the lag or either it's the Maple problem which keeps dc-ing me.
Anyway, first of all, I would like to deliver the good news to all of you.
Our newbie LoanShark(Jr.Master) which has been absent for 2 years is now back and active(for the time being)!!!
Who is it, you may ask?
Of course, it is the well known, ArtOfNua!!! :D 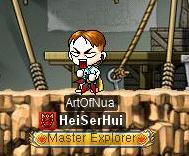 Ehehe...HeiSerHui welcomes ArtOfNua back to Maple!! F2.
Half-naked and equipment-less, Mom04310 has organized a Scarlion run last night to helm guild members.
And as a welcome-back-to-maple gift, we decided to helm ArtOfNua, as our main priority!! :D
Nevertheless, thanks to those who have come and help out for the Scarlion run last night. It was one heck of a messy party last night though. I think Momo also wan puke blood hor? :p
If I'm not wrong, there were 3 parties consisting of 14people. Since the maximum limit is 12 people in the map, 2 people were forced to leave. xRwjw and EvilKieli dc-ed.
Anyway, congratz those who have helmed, ArtOfNua, Yumih,GeneralArch and others. And congratz to those who have lvled during the pass few days as well!!
report done by steambunz
Email ThisBlogThis!Share to TwitterShare to FacebookShare to Pinterest