The guild gathering was suppose to be cancelled due to the server maintanence at 12midnight. But, everyone was so excited about our own guild anniversary, not even the server maintanence can get in our way!
It started out with a small gathering at FM cc14. And slowly, more and more people log in. When, our Guild Master(LaoDa), 2hangfei finally logged in. Everyone was so delighted to see him! After all, he was missing in action for all this while in Maple, eh? ;X 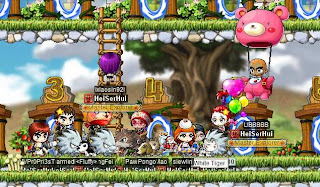 Well, it's not alot of members since it's a school day after all. Our VIP members such as, kohcmeng, Romeo, Blamb, davidlimxxx, hara, creamy, our special birthday guest, Reakio a.k.a Asther and the others were not able to be with us last night :( But, as you know, the party must go on, I think.
It was sooooooo hard to get everyone to sit down and take a proper SS coz some of them were AFK-ing and some of them are like hooligans, e.g,boi. LOL jk :X

With Laoda Taken By Sid

Not forgetting about Genesis and lizzzzzzzzards. I mean, Blizzards. 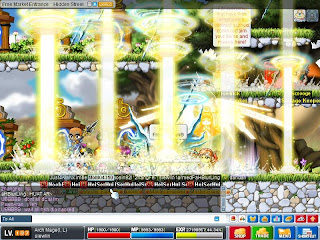 As soon as we finish taking one shot of SS, like finally. Our LaoDa and CharmedP03, have to excuse themselves! ):
Like I said, the party must go on. Since everyone was already gathered at FM. Things were so messy after that. Even kitteh lost his patience and his fur drop. I mean his hair drop. LOL. I, on the other hand, spammed on the Guild Notice :O
I wrote on the Guild Notice for members to gather at Room18 CC14, so we can celebrate in PRIVACY. The same room where we celebrated our guild 2nd anniversary.
These are the SS shots that we took.

An Almost Good F2 Shot Taken And Edited By Yiyi 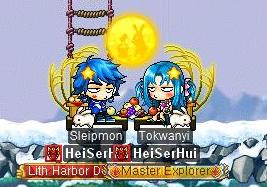 Our last SS attempt together was to jump in midair and take a shot. 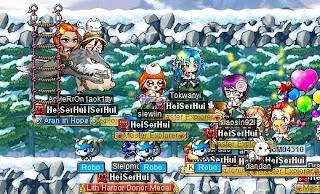 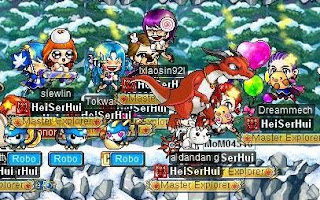 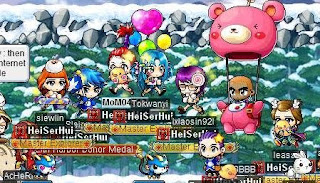 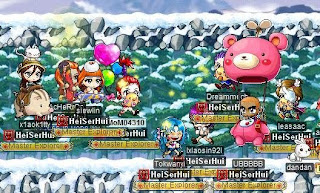 And Jump Sa More,
till we finally got the almost perfect picture... 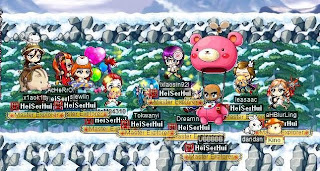 Jumping In Midair Taken By Sid

We were jumping so much, so much till Sleipmon freeze in Mid Air. LOL. And we decided to steal the chance to take the perfect SS before he dc-ed. But, too bad. He dc-ed. LOL.
We were jumping so much, I think we have abs! My abs were hurting, from laughing too much. LOL.
After the jumping exercise, everyone was tired and slowly went off. On the other hand, some stayed back for the countdown to DC together, which was me and Tokwanyi and some strangers. Our first guild DC event!
Soon after the clock stricks twelve, we bid our goodbyez and...
"Eh, why bo DC d?!"
And what do you know. No DC!
Or, maybe, we mistaken the notice? Maybe it was suppose to be 03-03-10, 11.59pm. Hmm? *shrugs*
So, yeah.
Happy 3rd Anniversary To HeiSerHui!
Hope HeiSerHui will continue to shine in many years to come!
Everyone Huat ARGH!
report done by steambunz
Email ThisBlogThis!Share to TwitterShare to FacebookShare to Pinterest